This is the first in a five-part series intended to give the reader insight to Le Gens de Couleur Libres, free people of color, of antebellum New Orleans. In this series, we explore who they were, how they came to be, why they were instrumental to the architectural development of New Orleans and how their legacy is carried through to modern day. This first article serves as an introduction to this oft-forgotten, influential group of people and explains who the gens de Couleur Libres were and how they came to be.

Free people of color were Africans, Creoles of Color (Creole refers to a person born in the New World) and persons of mixed African and European of descent who either earned, purchased or were born into freedom before 1865. Although they “made significant contributions to the economies and cultures of the communities in which they lived,” they were often overlooked. This group of people carved out a place in antebellum society that was neither that of the free white class nor that of the enslaved class, but a distinct society with its own culture, tradition and practices. They belonged to neither group which caused unique social issues “Inhabiting this place in between made their ambiguous and incongruent status one of the most talked about ‘problems’ of the first half of the nineteenth century, yet their story has been largely overshadowed by the harsh story of slavery” (Free People of Color in Louisiana. Free People of Color in Louisiana. N.p., n.d. Web. 07 Nov. 2016.) From this tripartite class system rose a community of artisans, craftsmen, builders and entrepreneurs that were instrumental in shaping the social, economic and physical growth of the New World.

The growth of this third class was due in part to the socially acceptable plaçage system that developed in the burgeoning New Orleans and neighboring settlements. Plaçage refers to the practice of European men taking women of mixed heritage as mistresses. When Louisiana was initially settled, there was a dearth of white females so males began to consort with natives and slaves. Even as the colony developed and the population grew it was still socially acceptable for a white, Creole or free man of color to form domestic partnerships with enslaved and free females of color. A majority of these unions resulted in offspring and it was common for the man to recognize and provide for this family even while creating families with white women.  As the colony developed it became more common for men to take New World born women as placées.

Interracial marriage was forbidden by law but the plaçage system allowed these men to bequeath property to their mistresses and children. It also allowed an avenue for women of color to inherit property, become landowners and secure freedom for themselves and their children. Some women of color saw the placage system as a means to self-determination and economic freedom. In the late 19th century, Creole women of color sponsored balls to provide an opportunity for white men to socialize with free women of color. The Orleans Ballroom, constructed in 1817, was one known for hosting these ‘Qudadroon Balls’. In 1881, The Orleans Ballroom became the home of the Sisters of the Holy Family Convent, the oldest female-led African American order in America. These walls now house the Bourbon Orleans hotel. While the quadroon balls were extravagant, luxurious affairs for wealthy Creoles of color, semi-public dances were also organized, where men could pay a fee to gain access to mixed race women.

The types of relationships between free women of color and white man varied. Some men maintained the relationship even after marriage to a white woman, maintaining two distinct households. Others remained lifelong bachelors on paper and lived their lives in a form of common-law marriage with their mixed households. Some even chose to provide inter vivos donations, for example allowing the placeé to own the home in which she lived. These types of transactions contributed to the high ownership rates for femmes de couleur libre and the growth of Creole enclaves, “By 1840 femmes de couleur libre owned about forty percent of the property there [Faubourgs Marigny and Treme]” (“French Creole | Early Creole Homes.” French Creole | Early Creole Homes. N.p., n.d. Web. 11 Nov. 2016.). After the end of a plaçage relationship, due to either death or marriage of the man, the placèe was free to re-enter a plaçage relationship, remain single or marry a free man of color. Many women began and ran their own businesses as a way to continue their economic independence.

Free people of color, “developed customs to protect themselves from the periodic hostility of whites, or the possibility of being mistaken for slaves” (knowla.org). They had their own balls, social clubs and even sent their children abroad to ensure they would get the best education. Although free people of color would later be known for their artistic contributions, many of their efforts were ignored due to their African descent. The upcoming articles explore the impact of five of these individuals, a developer, a builder, two architects, and a master craftsman. 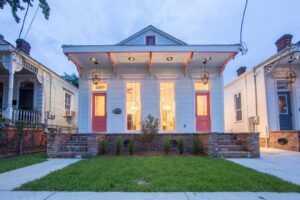 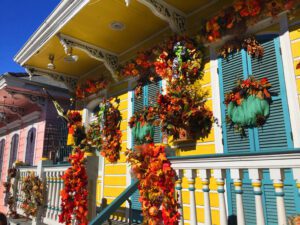 Happy Thanksgiving from the Team of Adamick Architecture!