We began this seven-part series by exploring the origins and culture of le gens de couleur libres. If you missed this introduction, you can find the article here. We then discussed the life of Rosette Rochon, who was an influential developer. In this third installation of our seven-part series, we will discuss a builder that Rochon often employed, André Martain Lamotte.

Born October 25, 1818, André Martain Lamotte was a free man of color of Haitian descent, listed as white in the birth index and ‘colored’ on his death certificate, who grew his wealth through construction.  Andre Martin Lamotte, also written as Marstain Lamotte and Lamothe, was the son of a white Haitian, Andre Martin Lamotte and a free woman of color, Eugenie Fraissinet. Based on historic research, we can assume that Lamotte’s father was a wealthy white Creole who escaped Haiti with the thousands of other Creoles (white and of color) during the slave uprisings there, “Saint Domingue refugees had to battle rumors about their ancestry because it was undocumented in Louisiana as seen in the case of Andre-Martin Lamotte”.  In 18ll Lamotte Sr. took out an ad in a newspaper to rebuke his fellow refugees for, “raising humiliating doubts about our [my family’s] origin”.  He complained that, ““Talk of this nature is bruited about here by half the refugees of St. Domingue against one another”.  His heritage was so important to him, that Lamotte Sr also, “somehow managed to buy and file with a local attorney copies of the entries in the parish books of Les Cayes documenting his entire ancestry.” (Ingersoll, Thomas N. Mammon and Manon in Early New Orleans: The First Slave Society in the Deep South, 1718-1819. Knoxville: U of Tennessee, 1999. Print.) It is therefore interesting to note, that Lamotte Sr.’s son Andre Lamotte will forever be known as an influential free man of color.

Although Andre Lamotte’s profession is listed as ‘none’ in the 1850 census, and ‘builder’ in the 1851 city directory, he owned property worth $11,000, including three slaves (US Census 1850, Louisiana Orleans Parish, 1st ward, 3rd municipality, Slave Schedule, pg 277). At the time of the 1850 census, the wealthiest free people of color, those with a self-declared net worth of over $10,000, were found in the 1st municipality in the fourth, fifth and sixth wards. In the 1860’s we begin to see a shift in concentration of wealth to the third, fourth and fifth wards. (Lovato, Frank Joseph. Households and Neighborhoods Among Free People of Color in New Orleans: A View from the Census, 1850-1860. Thesis. University of New Orleans, 2010. New Orleans: n.p., n.d. Print.) Lamotte was a man of means, but did not live in the wealthier Creole enclaves like some of his counterparts. Some free people of color were able to amass a considerable wealth; however, most were working or middle class. Based on Lovato’s analysis of the 1850’s census, we can understand that Lamotte was upper middle class.  Although there is no record of formal education, Lamotte called himself an architect as noted in his 1889 passport application. In the same application, André Martain Lamotte, son of Martin Lamotte and Eugenie Fraissinet, also a free person of color, is described as a five foot six, dark complexioned man with a narrow forehead, brown eyes, medium mouth, roman nose and round face and chin. Between 1850 and 1889, Lamotte gained either the experience or status and began to represent himself as an architect as opposed to a builder.

Lamotte is believed to have fathered at least seven children by his wives, Emma Dupuis, Octavie St. Avide (married in 1891), and his slave Catherine. Lamotte’s children with Emma were born between 1839 and 1846 and listed as ‘colored’ on birth certificates. His children by Octavie were born between 1890 and 1892 and were listed as white. Lamotte’s children with his slave are unrecorded, but his son by Catherine, Martin Lamotte, served the Confederate army and went on to become a skilled bricklayer. (“The USGenWeb Archives Project.” Orleans Parish Births 1796-1900. New Orleans Volunteer Association, Dec. 2002. Web. 02 Nov. 2016.)  (Lomax, Alan. Mister Jelly Roll: The Fortunes of Jelly Roll Morton, New Orleans Creole and “inventor of Jazz” Berkeley: U of California, 2001. Print.). The famed jazz musician, Ferdinand Joseph Lamothe, known as Jelly Roll Morton, is a descendent of Andre Lamotte. Jelly Roll Morton was the son of Edward Lamothe and Louise Monette, both identified as Creole.

Craftsmen, artisans and builders were common jobs for free people of color who did not choose to serve in the armed forces. Like military service, skilled trades gave slaves and free people of color a sense of social status, a network of people and a sense of tradition. The introduction of skilled labor allowed for slaves to gain freedom and perhaps economic independence. The commonality of these jobs may be due to the apprentice system that emerged in the burgeoning French colony. Like placage, the apprentice system developed as a response to the dearth of people in the New World. Slaves entered into apprenticeships with tradesmen in order to add to the needed skilled labor force in the new colony. This type of relationship continued even after the French ceded control to the Americans.  American laws allowed slaves to initiate contracts and lawsuits which allowed slaves recourse to sue, barter or work for their freedom. These skilled apprentices were now able to obtain their freedom, become artisans and gain status in their communities, “Builders distinguished themselves in the community of free blacks. Families like the Dollioles, the Fouchés and the Lamottes amassed fortunes as contractors and builders of much of the outer French Quarter and the faubourgs or suburbs, Marigny and Treme” (Kein, Sybil. Creole: The History and Legacy of Louisiana’s Free People of Color. Baton Rouge: Louisiana State UP, 2000. Print.) Builders of color frequently hired other free people of color to work as stone masons, brick layers and plasterers, creating a network of skilled laborers and craftsmen. Later on, in this series, we will discuss how some of these skills such as plastering have been passed down through generations and their importance and relevance to the design and rehabilitation of historic structures as well as the history and development of social standing for free people of color. Many of these builders were able to grow their fortunes by working in mostly Creole enclaves before branching out to other areas of the city. Rosette Rochon, discussed in an earlier article, was able to grow her considerable wealth by developing the Faubourg Marigny due in part to the fact that Bernard de Marigny only wanted to sell to Creoles. Other builders of color from this time period may have benefitted from the same biases.  Lamotte, whose white father was an escapee from Saint Domingue during the slave revolts, was no different, however he stood apart from other builders of this era in other ways. Lamotte played an instrumental role in the construction of the antebellum Faubourg Marigny, and was one of a very few free people of color who distinguished himself as an architect. (Kein, 217).

Lamotte constructed the atypical home for Rosette Rochon at 30 Union St. for $3,250 (1860 directory). This house was a two-story, kitchen home on the corner of Touro and Burgundy. The kitchen served as the main house, as opposed to being an accessory structure situated behind another building, like her former residence at 1515 Pauger, which is the orange building seen above.  (Wilson, Samuel, Roulhac Toledano, and Sally Kittredge. Evans. New Orleans Architecture, Volume IV: The Creole Faubourgs. Gretna, LA: Pelican Pub., 1974. Print.).   Although Lamotte was credited with constructing much of the Faubourg Marigny and several of Rosette Rochon’s buildings, it is difficult to ascertain specific structures he constructed due to the lack of documentation. Andre Martin Lamotte died Saturday, November 2, 1895 at 12:01 am at the age of seventy-seven (The Times Democrat [New Orleans] 3 Nov. 1895: n. pag. Digital). Like Rochon, Lamotte’s legacy lives in the Faubourg Marigny, the first Creole Enclave of New Orleans.

In the next article, we will discuss Joseph Chateau, known as “one of the most prolific free black builders of the antebellum period[.]”  (Reeves, French Speaking Hommes de Couleur Libre). 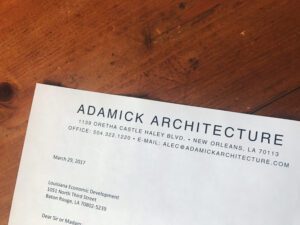 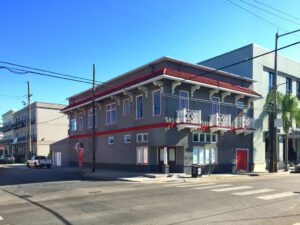