Locally produced brick has been used in New Orleans homes and buildings since French and Spanish colonial times, and has contributed to the unique character of neighborhoods such as the Vieux Carr . Such historic bricks have specific material and aesthetic characteristics that present both charm and challenges for the historic home owner. Their character and qualities arise from the unique history and geology of the Crescent City.

The city of New Orleans and its environs find itself near the end of the vast Mississippi River Valley, with much of the land built up from the alluvial deposits. Until European and American settlers imported building materials such as metal, stone, gravel, and Portland cement, the only locally available raw building materials consisted of shells, clay, sand, and wood from cypress and pine trees. No stone or pieces of gravel, and only a modest amount of sand, could be found near the original settlement founded by Bienville on the banks of the Mississippi. Early French colonists made due with the local materials that they had at hand. Cypress wood became the frames and fittings for houses. Oyster shells could be crushed and burnt to create lime for mortar, plaster, and lime wash. As for clay, it could be molded and fired into bricks in kilns.

Locally produced brick in the eighteenth and nineteenth centuries have unique characteristics. Broadly speaking, you will encounter two types of locally produced historic brick: a soft red brick and relatively harder tan brick. Both types are comparatively softer than brick produced in other areas of the United States in the same time period, and may be the result of the kinds of clay used to produce them and the relatively low firing temperature in local kilns. Locally produced soft red brick fractures easily and is prone to crumbling. As a result of this characteristic softness, care must be taken to minimize wear, stress, and weathering to historic brick walls and surfaces.

Many historic buildings in New Orleans have load-bearing walls of locally-produced brick dating from the eighteenth and nineteenth century. It became apparent early on that these bricks were not as sturdy as bricks produced elsewhere, so local building customs developed to protect them. Load bearing brick walls would be erected using lime-based mortar, which is also soft and relatively moisture permeable. Once erected, the brick walls of buildings would be covered in lime-based plaster both inside and out, and coated with lime wash as an additional protective and decorative finish. This combination of lime-based mortar, plaster, and wash used with soft New Orleans brick not only protected the brick from weathering and wear and tear, but altogether it comprised a system of compatible materials with comparable hardness and moisture permeability that provided relative long-term stability. 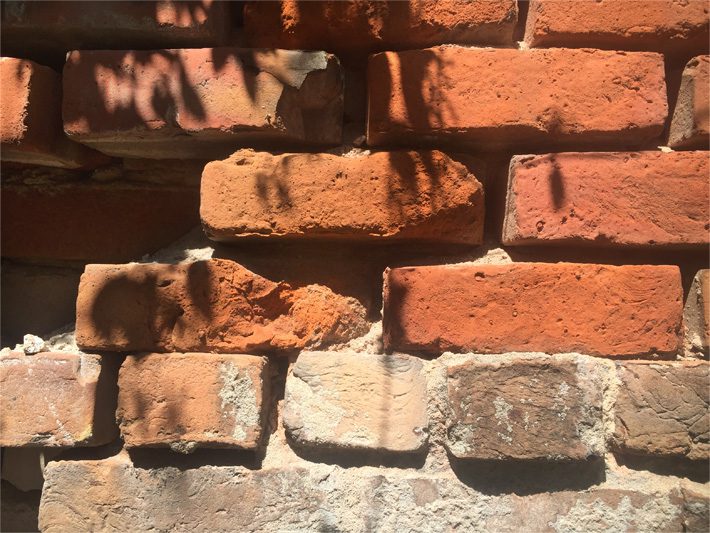 The exterior of brick buildings using local soft red brick commonly would be prepared in several ways to protect them from the elements. The most common treatment would be to cover the bricks with plaster to create a flat surface coated in pigmented lime wash. Occasionally, such plaster would be scored and painted red to resemble courses of bricks. Sometimes, bricks produced elsewhere would be shipped to New Orleans and applied as the outermost layer of brick in a masonry wall, with the softer local brick serving as an internal load-bearing core. The last way to prepare exterior brick walls would be to leave the soft red brick exposed, and although it is a common sight today, this was rarely done due to its softness and susceptibility to weathering.

Interior surfaces of brick walls were often directly plastered with lime-based plaster, or covered in wood lath and coated with some combination of lime and gypsum plaster. These plaster surfaces would be finished with either pigmented lime wash, paint, or wall paper. In addition to protecting the soft brick from wear and tear, these surface finishes helped moderate the ever-changing levels of humidity, moisture, and temperature in New Orleans, even on the interior of buildings.

The combination of weathered, broken plaster and partially or completely exposed brick walls of the local soft red brick, weathered and crumbling, have become part of the romantic impression of New Orleans. Indeed, many buildings now have partially or completely exposed soft red brick walls that originally would have been covered in plaster or some other finished surface. Despite the aesthetic appeal of such decayed surfaces, they can pose serious issues for the long term integrity of the bricks, which can weather and crumble to powder if left permanently exposed. For similar reasons, both the old soft and even the hard old tan local bricks are not suited for use as pavers in courtyards and other spaces.

The softness and relative permeability of these local red brick makes them vulnerable to damage from the application of incompatible materials. During the twentieth century, Portland cement became the common binding agent of mortar, due its strength, hardness, and relative impermeability to water. Such Portland cement based mortar should be avoided when repointing both the old soft red and the relatively harder local tan bricks as it can cause long-term damage. Bricks need to be pointed with mortar that is softer and more permeable than the bricks, so that the mortar takes the stresses and incidental moisture movement rather than the bricks. Mortar should have a sacrificial role in brick walls. Mortar that is too hard can cause bricks to fracture and be crushed, while mortar that is less permeable can cause water and salts to migrate through bricks rather than mortar, resulting in bricks that effloresce and crumble away. An all too common site in French Quarter courtyards is that of soft brick pavers that wear unevenly to reveal a honeycomb pattern of raised hard mortar joints and worn, recessed brick.

Incompatible surface treatments for historic brick an also pose serious issues for the long-term stability and integrity of brick walls. Portland cement-based stucco/plaster and concrete should not be applied directly to soft historic brick walls, as these can damage the underlying brick as the wall expands and contracts. Eventually, surface treatments that are harder than the underlying brick will separate from the brick wall, often ripping part of the outer bricks out in the process. Other surface treatments that can pose issues are paints and coatings with different degrees of moisture permeability than the underlying brick. In the extremely humid and wet climate of New Orleans, impermeable finishes such as latex, which does not breath moisture easily, can lead to water collecting in masonry walls. In old soft red brick walls, coating a wall with latex paint, even on interior surfaces, can rapidly accelerate the decay of the bricks. Lime wash and other compatible finish treatments for brick and other historic masonry walls must be selected with care to avoid long-term damage.

Proper maintenance for historic New Orleans brick walls and surfaces can help preserve their appearance and structural integrity. Historic brick should be cleaned only when absolutely necessary, such as to remove graffiti. Abrasive cleaning techniques such as sand blasting or pressure washing should never be used on historic brick walls. Similarly, chemical cleaners such be avoided whenever possible. Should cleaning prove necessary, you should test any cleaning method on a small, inconspicuous wall area to see how it affects to the surface.

Another maintenance issue is limiting the exposure of historic brick to moisture. If you have issues with leaking or improperly flashed roofs, water can run down or even migrate through the walls of your historic home. This can cause surface erosion, degrade mortar joints, and result in stains and efflorescence. Efflorescence, which often appears as a white mold-like crust on the surface of brick, is more than a surface discoloration; it is caused by the migration of salts through brick and other masonry walls. This process results in salts and impurities crystalizing on the surface and even the interior of the brick wall. The migration of moisture and salts within masonry walls can become a destructive process, which can cause the disintegration and eventual failure of brick walls. It may seem obvious, but making sure that any gutters and flashing are clear of debris and working properly can protect all the components of your historic home, including local New Orleans brick.

Efflorescence can also occur from rising damp, where naturally present moisture in the ground is drawn up by the walls via capillary action by porous bricks and mortar. This absorbed moisture migrates to the surface of the walls, where its evaporates and deposits any dissolved salts and minerals. The relatively shallow water table in some neighborhoods in New Orleans, such as the Vieux Carr , make this a relatively common occurrence in buildings with masonry walls. Rainwater splashing onto the base of walls, run-off from downpours, and flood waters can also contribute to rising damp. Traditional construction techniques for controlling rising damp include damp-proof courses, which can be a simple as a thin course of impervious slate between layers of brick a short distance above the ground or as significant as a course of granite blocks at the base of a wall. Existing masonry walls can be retrofitted to have a damp-proof course of slate or synthetic materials inserted into an existing historic masonry, if issues with damp are significant enough, though this may not be appropriate or feasible for some historic brick walls.

We strongly recommend the services of architects, contractors, and masons with extensive historical renovation experience when dealing with buildings with historic brick walls. Home owners in historic districts should consult relevant guidelines published by Vieux Carr Commission or Historic District Landmarks Commission for information on acceptable maintenance and renovation practices. With appropriate maintenance and preservation treatments, the character and value of your historic brick structure can be maintained and enjoyed for generations to come.

Your Historic Home: An Educational Series