When the first European settlers arrived in southern Louisiana, they encountered a landscape dominated by wetlands and traversed by a complex network of rivers, bayous, and estuaries. In this wet environment, they found vast tracks of ancient cypress trees. The cypress wood harvested from these old-growth cypress trees became the most common wood used in the construction of historic structures in New Orleans and other parts of Louisiana from French and Spanish colonial times forward.

The wood from these ancient trees felled in the wetlands of the Southeast possess distinct characteristics. Mostly importantly, old growth cypress is resistant to moisture and damage by insects, which is desirable in the extreme climate and environment of Louisiana. Wood architectural elements crafted from old-growth cypress trees have survived to the present day in many historic dwellings in New Orleans due in part to these self-preservative qualities. The most distinct form of old-growth cypress is “sinker cypress”, which were logs from felled old-growth trees that lay submerged in water for sometimes hundreds of years before being pulled out, dried, and milled. 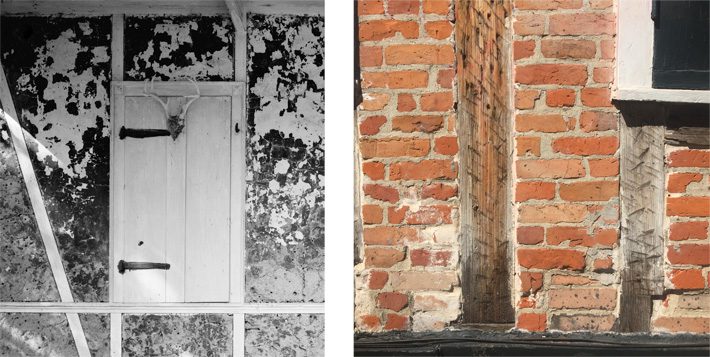 Two traditional construction techniques common in Louisiana during the French colonial and Acadian settlement periods were bousillage and briquette-entre-poteaux, as seen in the photographs above. Both techniques relied on a combination of a cypress wood heavy timber frame known as columbage with a solid infill material, such as mud, moss, and horsehair in the case of bouisillage and locally-produced brick for briquette-entre-poteaux.

In addition to framing, cypress wood was used for doors, window frames and sashes, shutters, and other components of houses. Despite its utility and near ubiquity in New Orleans and elsewhere on the Gulf Coast, traditionally cypress wood was considered less desirable in appearance than hardwoods such as oak, and usually would have been painted rather stained and varnished. Many of the original surviving doors and shutters on historic buildings in the Vieux Carr are of cypress wood, though it may not be obvious from their appearance because they have been painted. If an exterior cypress wood element has lost its historic finish through weathering or wear, it is important to treat the wood to protect it from the elements. Appropriate finish treatments for exterior historic cypress include non-latex paint or pigmented limewash. While clear finishes—such as varish, clear sealant, or oil rub—can show off the grain and variation of cypress wood to stunning effect, they are discouraged for historic exterior wood elements, and should only be used in interior applications. 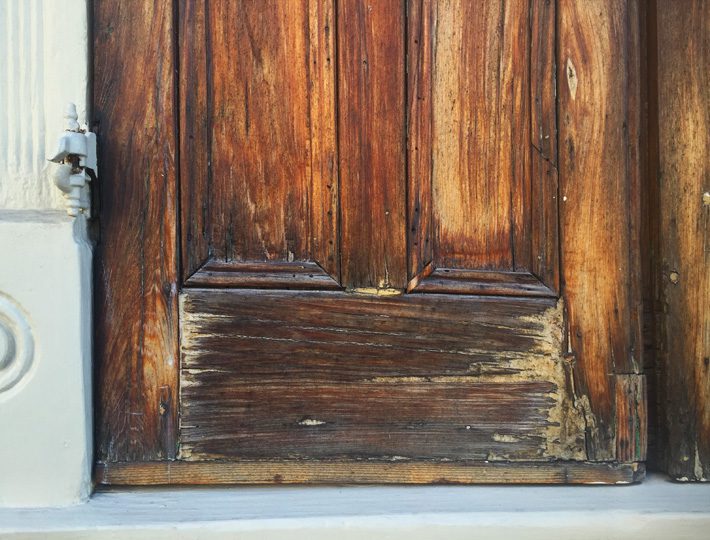 Once felled, old growth cypress wood was relatively resistant to damage from rot and insets, but living cypress trees such could be effected by various infestations and predations, such as the fungus Stereum taxodii, which infests bald cypress. Trees affected by this fungus bear a distinctive pattern of cavities in their wood, and once milled, this attractive form of cypress wood is known as pecky cypress. Prior to the accidental introduction of Formosan termites to Louisiana and other southeastern states in the mid-twentieth century, cypress wood was relatively unaffected from damage by termites. Since then, termite control has become an important aspect of the conservation of historic cypress wood structures and millwork. For any renovation or historic rehabilitation project, it is important to assess termite damage. Care should be taken to remove only damaged portions of wood members, patching and repairing where every possible, to minimize the loss of character-defining historic building material. Techniques for repairing historic cypress wood building components include synthetic patches to fill in rotted areas and other consolidating agents that can preserve historic wood elements, as seen in the photograph above. Repairs should be preferred over outright replacement whenever possible for prominent yet damaged building components.

At the present time, there are pressing environmental concerns that should discourage the general harvesting of existing old-growth swamp cypress forest. Such trees with their living root systems help shore up wetlands, protect coastal and inland areas from flooding and erosion, and represent vital components of wetland ecosystems. In addition, wood harvested from tracks of young-growth cypress trees, often as a second generation that replaced the trees felled since colonial times, do not possess the same self-preservative or aesthetic characteristics as old-growth cypress trees or sinker cypress, which makes them less desirable for new construction or repairs to historic structures. 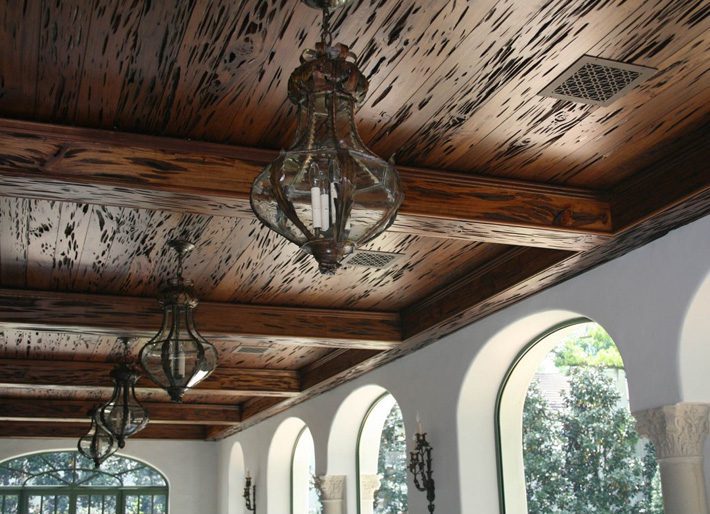 Fortunately, there are responsible sources for old-growth cypress wood that do not involve harvesting existing wetland cypress forests. Some lumberyards offer reclaimed cypress lumber that has been milled from the wood of heavy timber structures, such as warehouses and barns that have been demolished. Other lumber supply companies offer recovered lumber, which are milled from old sinker cypress logs that have been responsibility harvested from rivers and other waterways without having a negative ecological impact. Such reclaimed and recovered cypress offers freshly milled lumber with comparable qualities to historic wood. For instance, the Goodwin Company in Florida offers both reclaimed and recovered cypress wood utilizing responsible sourcing practices, such as the reclaimed pecky cypress seen on the ceiling pictured above.

In the News: Bakery Village