New Orleans traditional homes are known the world over for their distinctive historic ironwork, from the famous and elaborate cast iron cornstalk fences, to humble wrought iron railings on the balconies of Spanish colonial and early American buildings in the French Quarter. While both cast iron and wrought iron have graced the exterior of many historic buildings throughout the crescent city, they are distinct materials with differing characteristics and traditional uses. It is worth learning about these elegant historical building materials both to appreciate their role in Louisiana architecture and to keep their differences in mind when renovating your historic home. “Wrought” is an archaic form of the word “worked”, so wrought iron literally means “worked iron”, which is appropriate since most historic wrought iron was produced by blacksmiths. Wrought iron contains very low amounts of carbon, commonly less than 0.1%, but contains 2% slag, composed of silicon and various impurities. Wrought iron would be refined from iron ore in batches, known as blooms, and then beaten while hot to remove excess slag till the desired metal characteristics were achieved. The slag, rather than evenly distributed throughout the metal as an alloy, actually runs through the metal as fibrous intrusions known as stringers. Wrought iron varies considerably in its characteristics as result of it being produced through this manual process of refining and forging into a finished product.

Despite such variations, wrought iron possesses considerable ductility, meaning it can be beaten or drawn into elongated shapes, which cast iron cannot. Many fixtures on historic New Orleans buildings were made of wrought iron, shaped by local blacksmiths or imported from foundries elsewhere. Wrought iron railings can be distinguished from cast iron balconies by their thin, ribbon-like forms. Other common wrought iron building components seen in historic New Orleans buildings include hinges for doors, windows, and shutters, locks and latches, and nails. Wrought iron railings and beams supporting balconies were common during the French and Spanish colonial periods and early American period in New Orleans, and can be seen on several surviving structures from those eras where these wrought iron elements remain in service.

Today wrought iron is no longer produced on a commercial scale and contemporary building materials that bear that name are actually some other workable form of iron, such as mild steel. Currently, only small quantities of true wrought iron are produced. This wrought iron is typically produced for architectural restoration by recycling scrap wrought iron. Many modest homes in the twentieth century New Orleans had wood columns and railings replaced with metal work that resembles historic wrought iron, with rods and curved curlicues, whether it suited the original style and character of the homes or not. Just as today, much of this decorative ironwork from the mid- to late twentieth century is actually some form of mild or workable steel. In general, true historic wrought iron produced during the French and Spanish colonial periods and early American period has a finer, more delicate, and less florid appearance than the commercially mass produced ironwork that it inspired during the twentieth century. 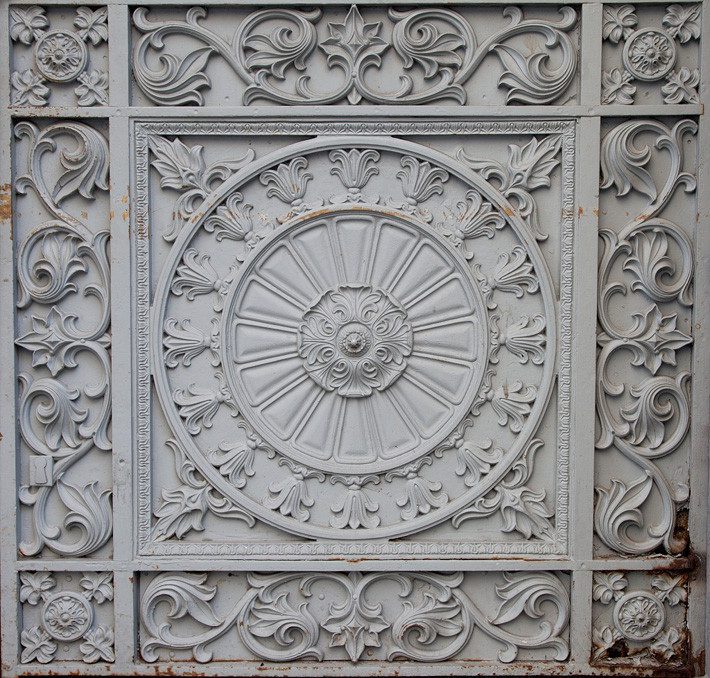 Cast iron is an alloy of iron, carbon, and silicon. The most common form of cast iron is known as grey cast iron, which historically contained 2.5-4% carbon and 1-3% silicon. Grey cast iron is poured or while molten into a mold to take a specific shape, or “cast”. Historic grey cast iron tends to be brittle, and cannot be worked once cast into a shape. It does, however, resist deformation and wear, and its composition makes it more resistant to corrosion than wrought iron or steel. It has a comparable compression strength to steel but less tensile strength. In the nineteenth century, cast iron was produced on an industrial scale by melting down pig iron derived from iron ore with other minerals and carbon to produce molten iron with the desired characteristics. Once molten, the iron which would then be cast into architectural components, parts for machinery, fixtures and fittings of all kinds, and house goods such as pots, pans, and stoves. Structural cast iron columns, often with a highly decorative appearance despite their function, became common during the second half of the nineteenth century. Unfortunately, cast iron loses its compressive strength when exposed to high heat, and can be subject structural failure during building fires. This weakness lead to its eventual replacement with fire-protected steel for structural components by the end of that century.

By the mid-nineteenth century, cast iron had mostly supplanted wrought iron for decorative ironwork. By then, foundries in the New Orleans area and elsewhere in the country were producing a dizzying array of architectural components made from cast iron. The residents and builders of homes in New Orleans had a seemingly insatiable appetite for filigree-like cast iron elements, whether for new constructed buildings or for application on already built structures. Railings, columns, and other elements of balconies and galleries were marketed as “verandas”, as they were then known, and were popular not only in New Orleans but also throughout the United States and even other countries such as Australia!

The ability for cast iron to assume complex refined shapes allowed for great imagination in the design of decorative elements, which could mimic naturalistic elements such vines, stalks, leaves, shells, flowers, and all manner of classical and gothic ornament. Especially well known are the cast iron verandas of the Pontalba Buildings, whose railings feature the “AP” monogram of the formidable woman who built them, Micaela Almonester y Rojas, Baroness de Pontalba. While some structures, such as the verandas of Pontalba building or the elaborate fences and gates of the adjacent Jackson Square, were custom-made, many cast iron components were mass produced and available through mail-order catalogs. Local manufactures of cast iron building components in New Orleans included Leeds and Co., the Shakspeare (sic) Foundry, and Miltenberger. 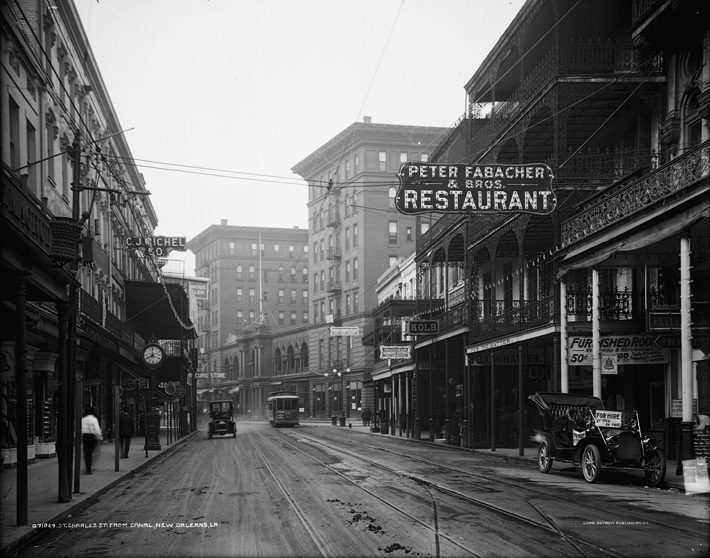 If metal building components become corroded, they can lose character-defining details or even their structural integrity. According to the guidelines published by the Vieux Carr Commission,“[t]he most essential maintenance requirement for wrought or cast iron is regular repainting with rust-inhibitive paint.” For routine repainting, fresh paint can be applied over the existing paint, unless it has decayed, in which case paint should be removed until the next sound layer underling the decayed paint has been reached. If the wrought iron or cast iron shows evidence of rust, then the paint should be completely removed in the affected areas, and material-appropriate, rust-inhibiting primer and paint should be immediately applied once the material has been cleaned and any surface corrosion removed. Paint forms a protective film on the surface of the metal that prevents the oxidation involved with corrosion. Paints should be selected for compatibility with cast iron and wrought iron; present-day latex paints should never be used on ironwork, as it can cause oxidation rather than prevent it. Paint colors should be selected for appropriateness for time period and style of the ironwork and the building to which it is attached. Paint analysis can be performed on historic ironwork by preservation specialists to help determine the period colors for the ironwork on your historic home.

Ornamental iron structural components, such as cast iron columns, should be regularly inspected. Such inspections should ensure that any fasteners remain intact, that each iron component remains firmly attached to the rest of the structure and other iron components, and that no damage such as cracking or deformation has taken place with each component. If any repairs are required, structural engineers and preservation experts may be required to evaluate the condition of the structure and recommend any repairs or replacements. If a cast iron or wrought iron component is damaged beyond repair, it should be replaced with a matching component in material, dimensions, profile, and finish; in some historic districts, the removal of ornamental metalwork is prohibited without replacement in kind. With proper maintenance and care, historic cast iron and wrought iron building components can remain in service indefinitely, and continue to lend their charm to your historic home for years to come. 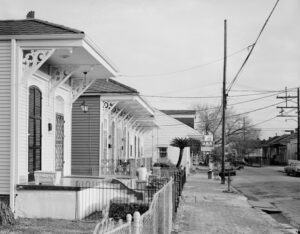 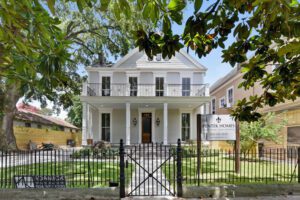