The Tremé is well known for being the first area designated for creole and free persons of color in New Orleans. Yet another neighborhood, Pontchartrain Park, became the first gateway to modern suburban life for African Americans in the twentieth century.  This subdivision remains a significant gem in the city of New Orleans that is slowly but surely coming back after widespread damage during the aftermath of Hurricane Katrina. Its story began as the last Gentilly neighborhood to be developed in 1954.

At the turn of century when the population started increasing in New Orleans, city developers and politicians decided that they needed to drain the outlying areas of the city to accommodate the influx of people and prospective businesses. An engineer named A. Baldwin Wood helped to make this plan possible by devising a pump system and drainage plan. The land cleared out would eventually be developed into the lake area suburbs, with spaciously sized lots for new development.

In the 1950s during the Jim Crow Era and after World War II, the GI bill was made available to all individuals who served, regardless of color. This in turn allowed African Americans to finally be able to afford decent housing in the city of New Orleans. A lingering problem was discriminatory redlining, effectively barring new middle-class persons of color from finding a spacious house to buy or build (Domonoske, 2016). Although he did not advocate for integration, Mayor Chep Morrison encouraged the city to sell the recently swamp-dredged land for the purpose of developing a subdivision for blacks, thus placating his new voter base. In turn, many white residents left Gentilly Woods to avoid living near this newly formed subdivision, which in turn allowed more African Americans and Creoles to move to this area.

The developers at W.H. Crawford Corporation turned the cypress wetland into single-family homes. Many of the original residences built in the 1950s were ranch-style, although styles have changed with demolition and renovation.  Before Hurricane Katrina devastated the subdivision in 2005, these single-story homes boasted low roofs, open floorplans, and spacious square footage to fill with bedrooms, multiple entertaining area, and everything needed to raise a family. The exteriors of these houses were simple and rustic with combinations of stucco, wood, brick. Typically, three buildings were set on lots with foundations of at-grade concrete slabs (TCLF, 2016). A boundary divides this area from Gentilly Woods Subdivision at Dwyer canal near Mithra St. and the neighborhood is surrounded by the Industrial Canal and railroad tracks along Providence Place and Campus Boulevard. The focal point of this urban area is a 200-acre stretch of green space that is known as Pontchartrain Park and the Joseph M. Bartholomew Memorial Golf Course.

The  residents that originally resided in this 20th century development were a growing category of professional African Americans with degrees and stable careers such as doctors, teachers, postal, and refinery workers. Many were homeowners until their deaths, and most houses have now been passed down through three generations or more. The reconstruction issues plaguing residents after Katrina range from flood insurance issues including increased costs, navigating difficult zoning rules, or houses being in secession (Escobedo, 2010). This area receives meager funding from the city for upkeep of infrastructure. If you drive through the neighborhood, it seems that many of these streets have not been improved since the development was built.  Despite this, this subdivision has proven its resilience since Katrina through new construction and renovations of existing properties that took over ten feet of floodwater in some sections.

Adamick Architecture has the expertise to serve residents of Pontchartrain Park or landowners of other mid-twentieth century homes and empty lots realize their vision for renovation or new construction in the community. We realize even twelve years later, there is still a long way to go and we would love to be of assistance. 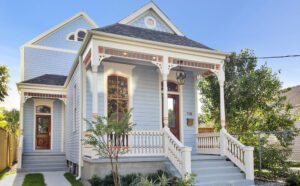 Three Family Residence in the Bywater